‘I still have not satiated my love of stone; the idea of a truly paved courtyard, say, where there wasn’t a single chance of trespassing further than its boundary, fills my gardening greed with desire…’

These words from Mirabel Osler in her wonderful book, ‘A Gentle Plea for Chaos’ have suddenly become very comforting. They have relieved my recent anxiety about getting rid of our lawn. Now I use the term ‘lawn’ loosely. It was not a lawn, it was a small patch of scrappy dog-damaged grass whose brief green flush at the start of every year gave me hope that it might actually become something better. It was sadly inadequate, but it was grass, and it satisfied my suburban understanding of what constituted a garden. What I had wanted was a lush, green, clipped and manicured carpet, bordered by an energetic jumble of shrubs, trees and perennials. The contrast appealed to me: calm within chaos. What I didn’t realise was that a lawn this small in a space this deprived of sunlight, on compacted and airless soil, was never going to work. So a few weeks ago, after ten years of vainly tending, aerating, scarifying, trimming seeding, turfing and feeding, I called it a day, took the lawnmower and the edging shears to the dump and set off for Hertfordshire, where I had been told Architectural Salvage Source had a few last palettes of reclaimed York Stone.

Quarried for centuries, York Stone has provided durability for great cathedrals and humble churches, Roman roads and London pavements. Now, alongside these achievements it can count twenty square meters of a North Hackney garden. I wanted a material that had stood the test of time, and what I found was beautiful. Cool, lichen-marked slabs of enormous size, worn around the edges and pitted with age and use. They were delivered last week and within five days we started to see the emergence of something approaching the courtyard Mirabel was talking about. However, until the weekend I was unable to fully appreciate the transformation. At this time of year, it is dark when I leave the house and dark when I return, so I have had to satisfy my curiosity by pacing about the space with a torch in the evenings and imagining what it will look like in daylight.

I have shifted the geometry slightly. Eliminating more of the West-facing bed, we have taken the stone right up to the old wall, replacing the old granite sets, and forming a sunny seating area more aligned to the East/West axis. This has meant that the stone doesn’t reach as far on the other side as the grass did, so a much deeper bed has been created here in the shady side, into which I will extend the woodland planting. This has had the added benefits of eroding any vestiges of symmetry, (a good thing) and giving me an excuse to buy more plants, (a very good thing). 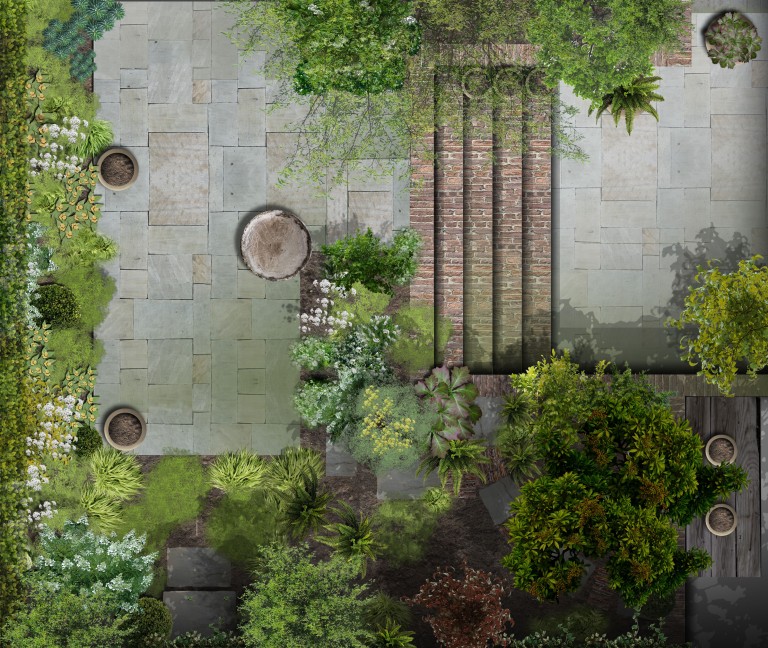 It has also made me start to think about the garden as a room, which needs to be furnished. Now I’m not one for over-cluttering a room. I like space around things. However I do appreciate a well-placed object or two, so have been searching ebay for a reclaimed vintage planter who’s shape will contrast nicely with the few I already have. I wanted something low and shallow; a large dish which I could fill with spring bulbs. The one I found is actually concrete rather than stone, and I am told it is by the mid-century Swiss designer Willy Guhl. The price I paid suggests that it’s probably not one of Willy’s but I love it. As yet, however, it remains unplanted. The rain has barely stopped since the stone was laid and we have been visited by a pair of foxes who despite not looking particularly hungry, act as if they are. Along with the squirrels they are making persistent and concerted efforts to remove the chicken wire I have secured over the other pots and seem to be digging holes in anything left unpaved. When I come up with a full-proof plan for protecting it, I will fill the dish with the remaining tulip bulbs or perhaps the Fritillaria. The Frustrated Gardener tells me I still have time. 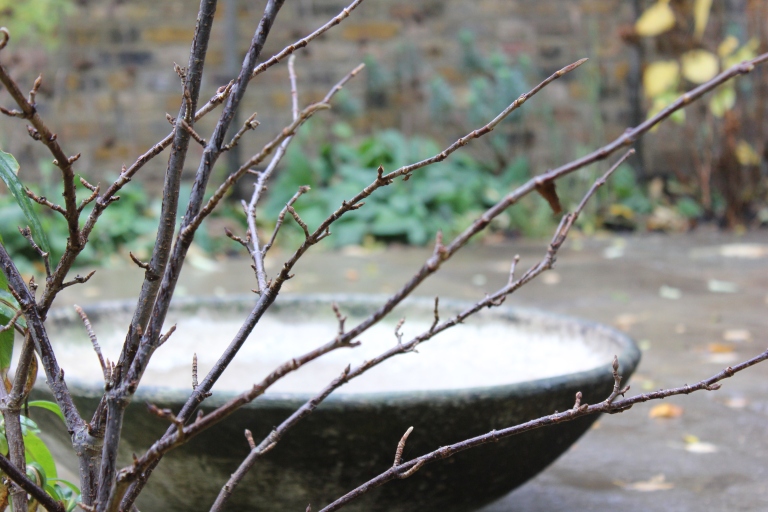 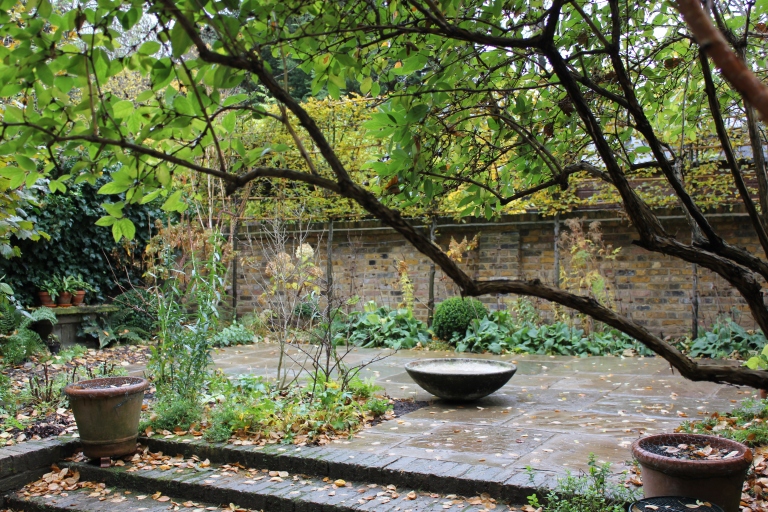 This weekend, I finally got to see the garden in daylight. And I have to say I do not miss the lawn. Until now, for half the year, we were unable to enter the garden without squelching through a bog. Now, even after heavy rain, we can come out here and walk on glistening slabs of stone. We can sweep leaves, prune, tend the beds, tie back the roses and actually ‘garden’. And even when we run out of things to do, we can sit out here and pretend we are in one of Mirabel’s courtyards;

‘Here, amongst limitless space, I plan small courtyards or medieval sanctuaries: places of paving and pots, where an outstretched hand touches a definitive boundary. What bliss.’