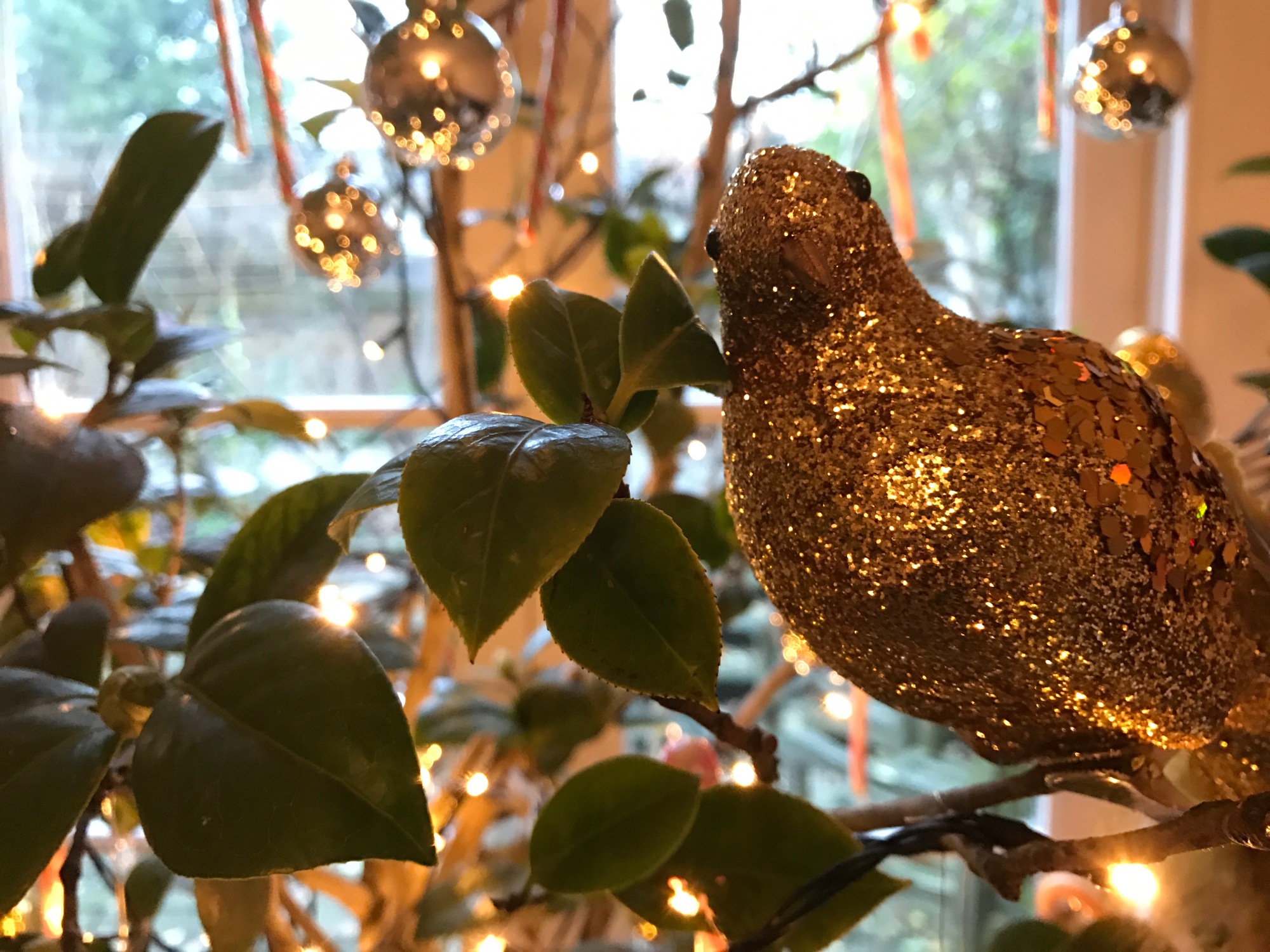 I have to admit that I find being restricted to the house over the winter months makes me restless. Gardening books tell me that this is the time to withdraw and hunker down. To think and read and plan for the spring. But I am impatient, and I want to be outside watching things grow. Not being a lover of house plants, and lacking room for a greenhouse, I find myself with little to do. I like my plants either in pots outside or rooted firmly in the ground. At this time of year though, for obvious reasons, I am forced to embrace the idea of indoor vegetation.

My relationship with Christmas trees is ambivalent. Year after year, usually in early December I find myself wondering whether there might be an alternative to the mind-numbing challenge of trying to get this right. Once I resign myself to the fact that anything else would be seen as willful or pretentious, the ritual unfolds. I order an over-priced, too large tree, I wait in for its arrival, I spend two hours looking for the ugly old metal stand in which to clamp it. I wrestle with its rusted screws and usually succeed in erecting something roughly vertical, ready for decorating.

I’m not sure whether its the layout of the furniture or the shape of the room, but together they seem to conspire against finding a location both pleasing and practical to position a tree of any size. The most logical place would be exactly where the dogs’ beds are, but in avoiding the confusion that always ensues when we dare to move them, the tree inevitably ends up relegated to the study where, decorated and illuminated, it goes unseen for most of the festive period. I warmed to this location, however, on discovering the benefits of an instant and easy ejection through the french doors when the time finally comes to end the suffering. I recall the time when I was turned upon with horrified stares and shouts of ‘YES’ when I dared, one boxing day, to ask the question ‘is it too early to think about taking down the tree?’

For a ritual intended to cheer the soul and warm the heart, this does, I concede, sound a little negative. Not all years have been thus. Once, about fifteen years ago, leaving the procurement of a tree so late, we decided to forget it and go without. But on walking home from a pub the day before Christmas Eve, we saw one laying on the pavement, discarded from the foyer of an office building. It may have served its purpose but we felt it deserved a second life. Desiccated by weeks of heat and conditioned air, it was looking past its best, and by the time we’d dragged it home, there was barely a needle left on it. But despite its slightly sinister and skeletal presence in the room, I convinced myself it had potential. The transformative power of gold spray paint is astonishing. Applied with a Midas touch, its gilded limbs softly illuminated by fairy lights and hung with cheap decorations, the tree came alive, and I am convinced that if we’d had somewhere large enough to store it, we’d still be dragging it out and enjoying it even now.

This year we have, for a second time, departed from tradition. For some reason the events of the year have befuddled both of us (an American and a European) and left us a little lacking in celebratory spirit, so no Christmas tree was purchased. Instead I turned my attention to the garden to see what I could bring indoors. 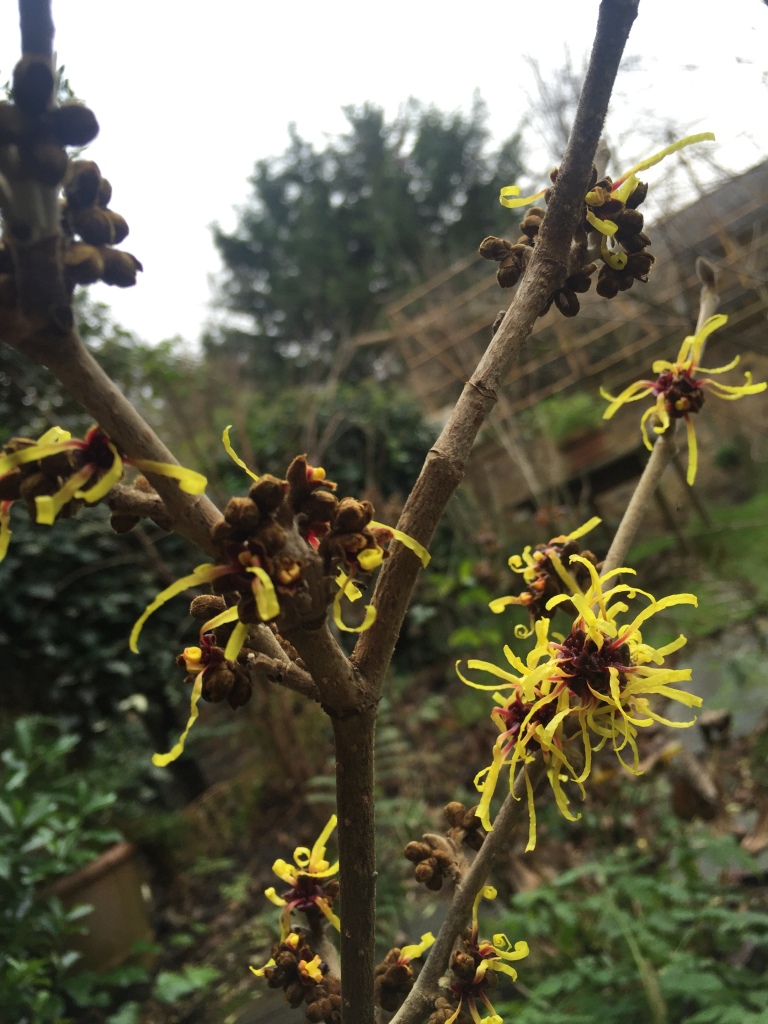 I have to say, possibilities are limited. Had I the foresight to plan for Winter interest, the garden might be in a position to offer more. But I didn’t. There is no Cyclamen, no glowing fiery Cornus stems or holly branches laden with berries. There are Hellebores, but they are currently flowerless. The Hamamelis is starting to make an effort, but I think I shall wait until the new year before I plunder that. Yellow just seems wrong at Christmas. So what I have is Ivy. Loads of it. Whilst I have removed huge swathes of it on one side of the garden in order to install the new stone, there is still plenty on the other. So I find myself out here with secateurs snipping off armfuls of the stuff. Ivy does add bulk to a decorative scheme, and can have quite the impact when distributed liberally across a mantle. However in itself it is not particularly attractive and lacks that element of sparkle people expect from festive decorations. So I have supplemented it with battery powered LED lights and five pots of white Cyclamen. This has gone some way to getting me in the mood, so spurred on by an unexpected enthusiasm, I have now added three tiny conical fake trees and a couple of decorative birds. 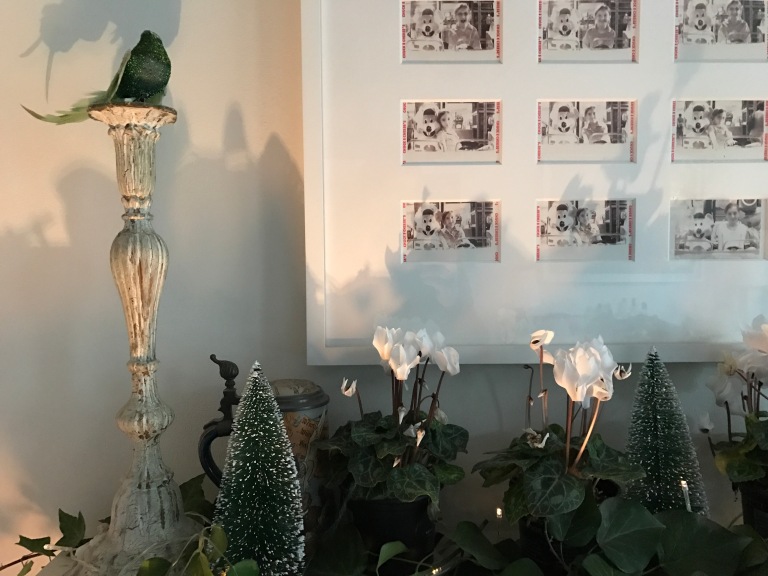 I would have been happy to leave it at this had I not been reproached by certain family members for failing to provide a tree. So whilst resisting complete submission, I have reached a compromise. Looking out of the french doors my eye fell on a Camellia which I have been nursing back to health in a shady cool spot in the corner of the terrace. This poor plant spent far too many years pot-bound in the heat of the front garden and obviously didn’t like it. No Camellia would. However a few seasons in more hospitable conditions have put a gloss on its leaves and brought a vigour to its stance. With its dignity restored, it is covered in buds and glows with health. So I have brought it inside, mounted it on a perspex plinth and festooned it with Christmas baubles and cheap lights. 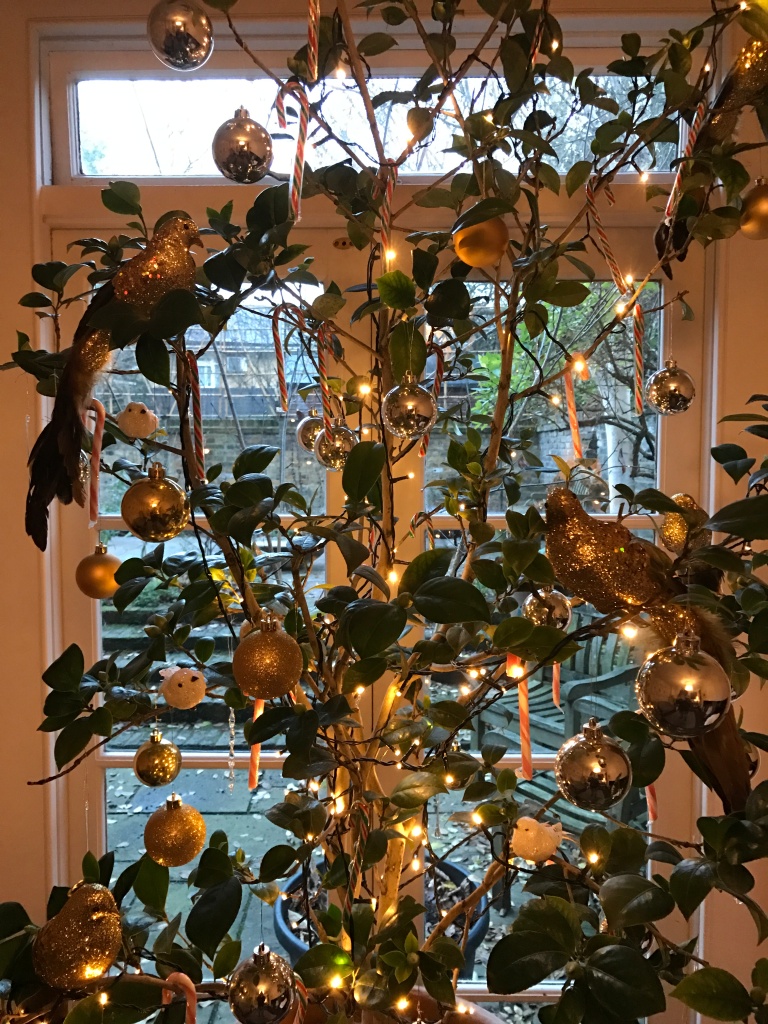 Opinion is divided on whether or not this is a success. However I think I love it. Of course I’m worried for its health, so try to ensure constant watering and cool conditions. If it survives this new indignity, I shall seriously consider a little judicious pruning in the spring in order to encourage a more festive shape, and may end up hauling it in year after year. 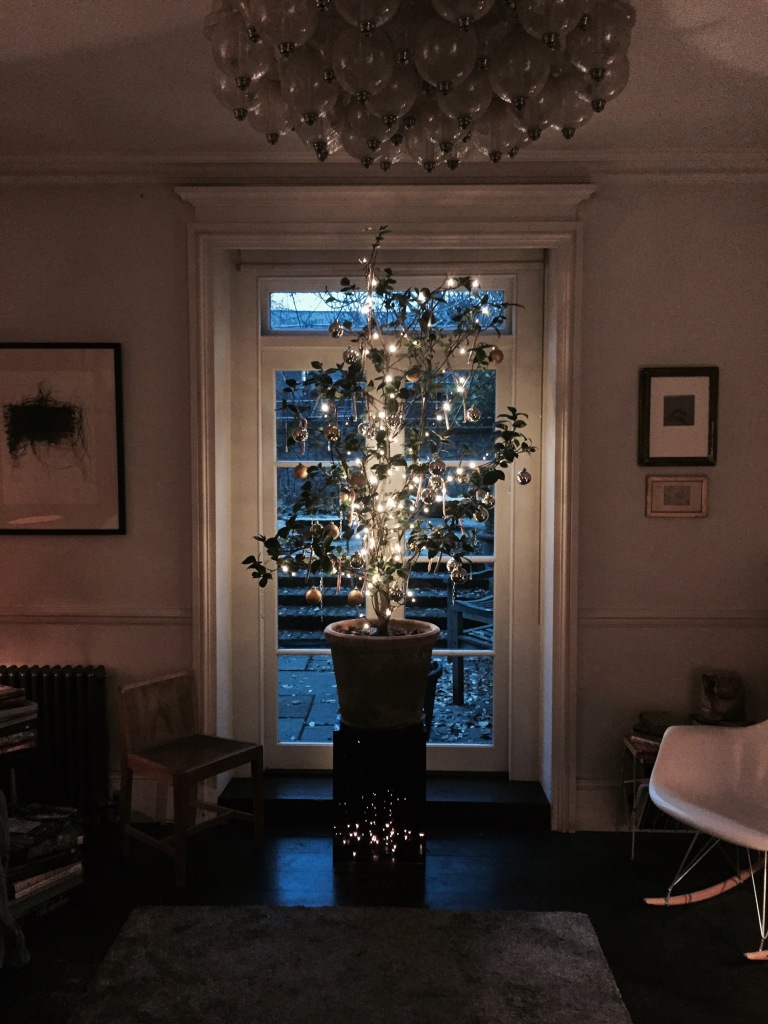 Follow Half a Garden on WordPress.com
Blue skies and a bit of sunshine 😊