I thought I knew an umbellifer when I saw one. Apparently not.

Following the success of the Cow Parsley and the Sweet Cicely and falling victim to recent horticultural trends, I decided I needed more umbellifers. Their impact at the beginning of the year was so magical yet so brief, and I missed them when they were gone. The garden seemed somehow wanting without them and  I realised I had to extend their effect late into the summer. Possible candidates were Bronze fennel, Angelica, Ammi major, Selinum Wallichianum… the list was extensive. However I remembered a friend telling me of the success she’d had with Valerian, which, she told me grew to a height of about 1.5m unsupported, and emitted a strange slightly musty vanilla scent which, in the sixteenth century was extracted for perfume. The ancient Greeks and Romans used it as a medicinal herb and and its use as a sedative and cure for insomnia has been documented over the centuries. Now I don’t actually need a cure for insomnia. I find a bottle of wine works just fine. But if I can drink it in the garden amongst the swaying heads of the valerian all the better.

More importantly though, it blooms from June to September and its ghostly white flowers really do appear to float in the air on summer evenings. So last year I found myself trawling the British Wildflower Plants website once again and ordering several plugs of what I thought was Valerian. Now Valerian is not actually an umbellifer. It belongs to the Caprifoliaceae family, which weirdly includes honesuckles and vines.
However to my uneducated eye, it shared the same characteristics and promised to fill the vacancies left by the anthriscus and the now fading Myrrhis oderata.
The plugs arrived and I peppered the rear bed with them. As they gained strength and height I started to eye the foliage with suspicion, then, as they started to flower I realised that what I had hitherto understood to be Valerian, was in fact Centranthus, commonly and confusingly known as Red Valerian (white form). Now I’ve experienced Centranthus before. When I first inherited this garden there was a clump of it thriving in the dry, impoverished soil in the sunny corner. Contrary to all photographic evidence, I never once saw it vigorous or upright. And despite the RHS‘s description of it as ‘an upright perennial’ I found it barely capable of supporting its flowers. In this garden, its stems just draped themselves lazily across the stony soil with a disinterested attitude. What I actually wanted was Valeriana Officilanis. I moved the impostors to the front garden where they will benefit from the sun-beaten dryness there, and returned to British Wildflower Plants in order to search out the real thing. Deciding it was too late in the year for plugs, I bought small plants which have grown magnificently and are now colonising the left hand side of the rear bed, their branched stems and white panicles floating in the air high above the large leaves of the phlomis.

Something else that isn’t an umbellifer, but ought to be is the Achillea. It is, apparently, from the Asteraceae family. 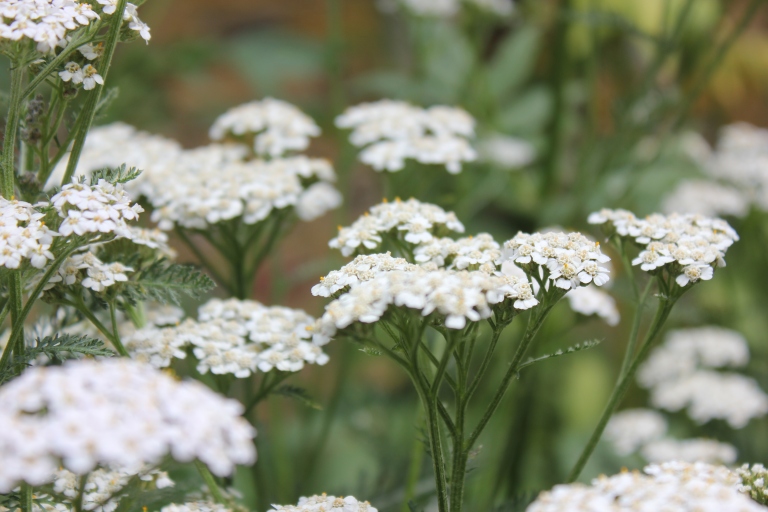 At the feet of the Valerian, I have threaded plugs of Achillea millefolium, the common yarrow. This is the plant of summer meadows and motorway banks and it’s contribution to the rear border is, I feel similar to that of the ribwort, in that it brings an informality and a slight sense of carelessness. Apparently it also intensifies the scents of other plants growing near it, and attracts bees throughout the summer, so all is good. 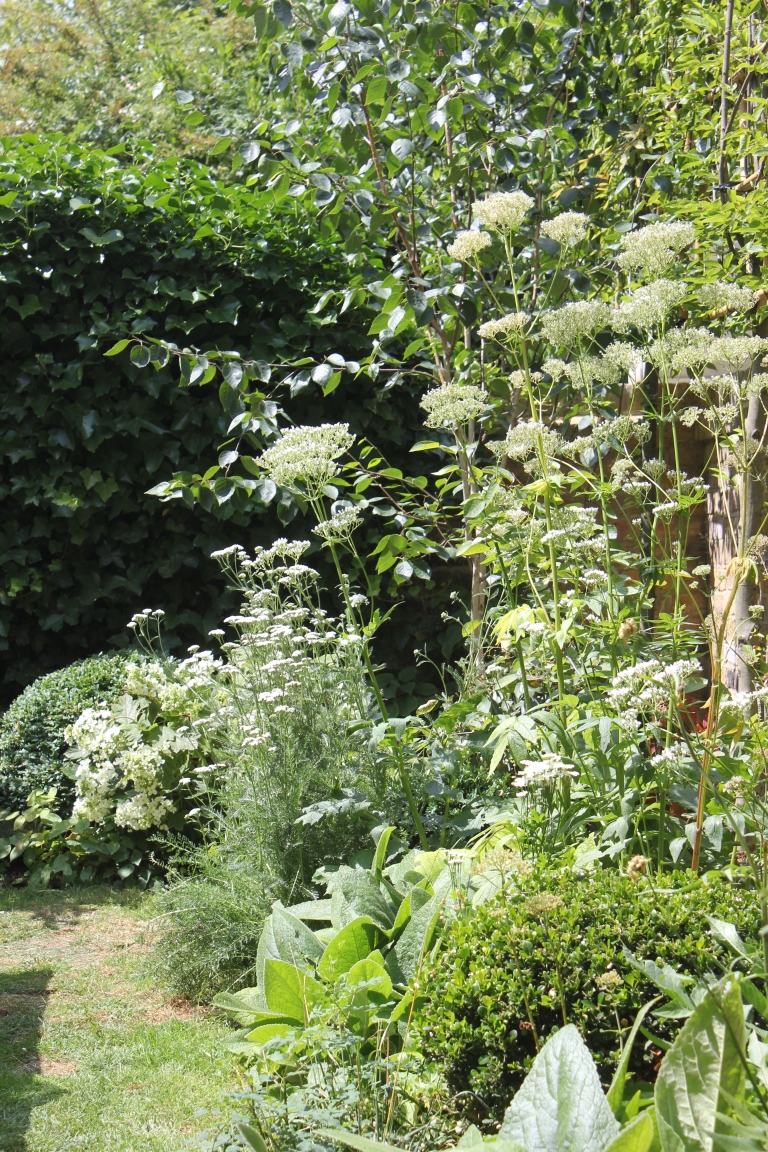 So having reconciled myself to the fact that neither Valerian nor Achillea are actually umbellifers, I am shocked to learn that Astrantias are.

This year these are the plants that just keep giving. I know its only July but experience has told me that a strict regimen of dead-heading will mean that I will be rewarded by new flowers well into October. I have A. ‘Buckland’, A. major and some A. major subsp. involucrata ‘Shaggy’, mainly planted in the damper, shadier side of the garden. I’ve grown to love them over the years, but this wasn’t always the case. My ambivalence towards Astrantias was due mainly to their promise of so much and their delivery of so little. Year after year I watched as crowns of glossy green leaves formed on the surface of the earth, from which a few leggy stems emerged, only to reach a certain height and flop under their own weight. I am now realising that my attempts to increase their population has led me to move and divide them too early, denying them the time they need to gain strength or vigour.

Of course the rain should help, but often it doesn’t. It may provide much-needed moisture but after a summer down-poor, even the strongest stems are found laying prostrate and beaten in the mud.

However, patience is rewarded, and after a few years of being left alone, the plants have grown more vigorous. They have become stronger and bushier and are holding their heads up high.