Well I have to say, things are looking good from the terrace. I formed this bed of mainly perennials to wrap around the steps and form an enclosing screen of green and white which would obscure the parched and dog-damaged lawn beyond. I probably shouldn’t refer to it as a border, because it is actually in the centre of the garden and straddles both its sunny and shady sides. 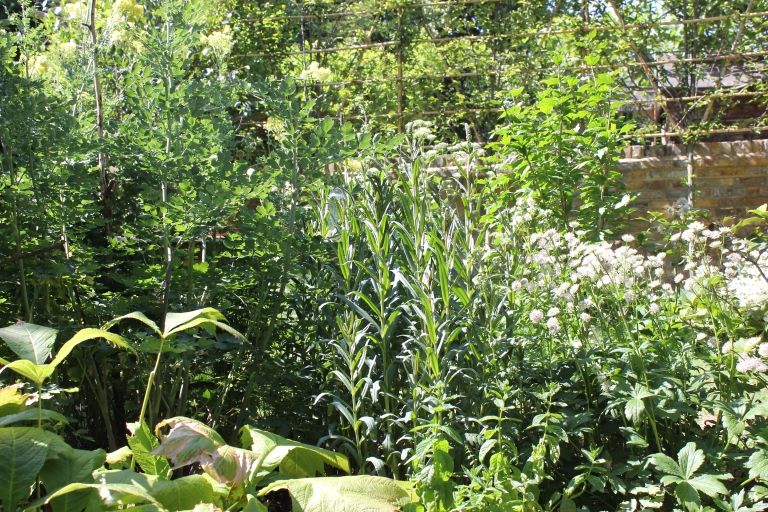 At this time of year the main players include Astrantia, Thalictrum, Lavatera, Hibiscus and a form of Lysimachia which I found at Witley Court a few summers back. There was no real plan to this scheme. Most of the plants I already had and needed to relocate. So despite the somewhat haphazard nature of its conception, I think it is starting to work well. Contrast is probably key to this success. Not in colour but in leaf form, flower shape and height. As I say, this was not planned but I will observe and learn from it.

The oldest and tallest of the inhabitants is the Thalictrum flavum, or Meadow Rue. The one I have here is susbsp. glaucum and its beautiful, delicate grey-green foliage is probably what first caught my eye. At this time of year it has reached its full height, and I am confounded by its ability always to exceed the 1.5m I am told to expect. I try to stake it, but it is too late to do properly. Whilst I have complained before about its having become a bit of a thug, I have learned to deal with it. In about June, as it is nearing full height, I reach for the secateurs and cut every other stem down to within about a foot of the earth. Over the following weeks, this will trigger new growth, so by now when normally I would be faced with an unmanageable mass of giant drooping and leaning stems, I can remove the few tall troublesome ones and watch as perfectly upright new stems start to rise and take their places.

In contrast to the glaucus foliage and fluffy flower heads of the thalictrum, there is also the Lysimachia with its green strap-like leaves and vertical spires of tiny white star-shaped flowers. I don’t actually know which Lysimachia this is. The label wasn’t particularly expansive, and I think it could be L.ephemerum or L. clethroides, it doesn’t really matter. It came from the gardens of Witley Court which we visited four years ago and I recall buying the last two pots they had. In the four years since it has multiplied impressively, and continues to do so, providing a wonderful architectural verticality next to the looser form of a white Mallow I bought from the Beth Chatto Nursery, Lavatera thuringiaca ice cool.

I have bought several of these plants over the years, but few have survived. The one I am left with, however, has thrived, and I wish I knew why. It has a beautifully open pure white flower comprising five perfectly heart-shaped petals and lends a kind of wide-eyed innocence which I love. Sadly by this time of year after many weeks of prolific flowering, it is beginning to fade and the petals are dropping. Luckily a neigbouring Hibiscus steps in about now and takes over. 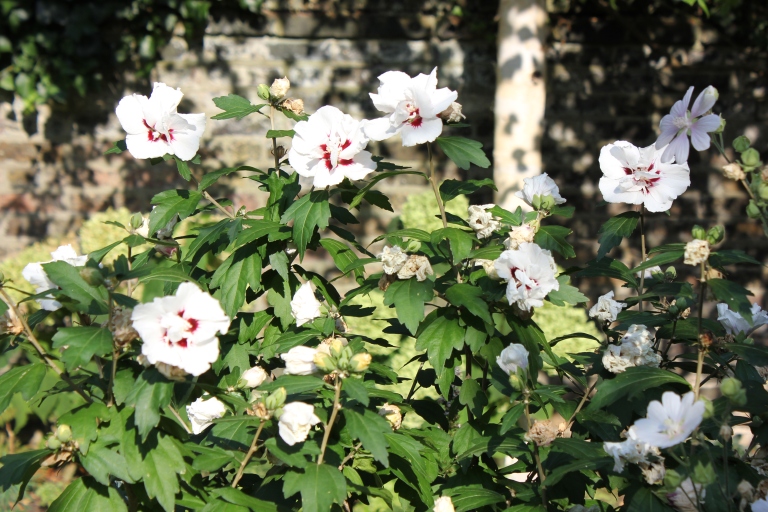 Hibiscus is slow-growing. I don’t remember exactly when I bought this one, but assuming it was at least ten years ago, progress has been glacial. Admittedly, I have moved it a couple of times, which I suspect it doesn’t like. It is Hibiscus Syriacus, and has a wonderful dark red centre and paper-like white petals which are a kind of sophisticated version of the Mallow. This year it has done very well, and its late-flowering habit means that there is something to look forward to in the later summer months when everything else seems to be fading.

I have Talked about Astrantias before, so I won’t go on. However their contribution to this bed cannot be overlooked, as they provide such a wonderful contrast in both leaf-form and flower. Their deeply lobed palmate leaves are a foil for those of its companions and their mass of tiny pin-cushion flower heads threaded amongst the taller occupants seem to tie the whole thing together in a composition which almost looks planned.

And I can sit on the terrace enveloped by their burgeoning foliage, blissfully ignorant of Dixie’s continued and frequent toilet visits to what remains of the lawn. 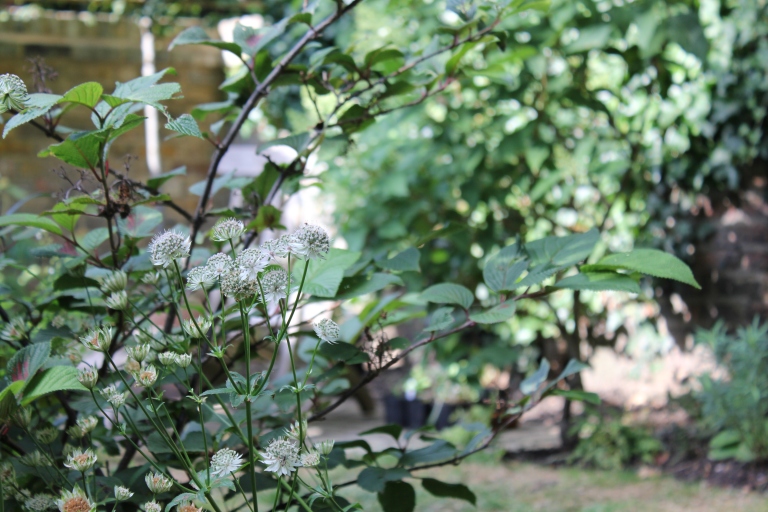 Follow Half a Garden on WordPress.com
Join 456 other subscribers
Missing the garden, so brought quite a lot of it inside #christmas